7 Ways to Revive Dull Skin and Get It Radiant Again

How To Begin A Career Like A Pharmacy Specialist

10 skin care products to use in the summer

The Food and Drug Administration warned rogue stem-cell clinics on Wednesday to stop selling unproven treatments that could harm patients.

The agency’s latest effort, like most of its previous ones, consisted only of letters to companies and clinics. One letter warned a company making products from umbilical-cord blood that it was violating federal law, and other letters told 20 clinics and stem-cell makers that they appeared to be subject to F.D.A. review for approval and that they should contact the agency about how to comply.

The agency’s regulators have essentially been playing whack-a-mole with hundreds of stem-cell clinics and manufacturers that have sprung up around the country in recent years to sell treatments for an array of ailments, like sore knees or failing hearts, with no real proof that they are safe or effective. The treatments cost thousands of dollars, and most patients pay out of pocket because insurers refuse to cover unapproved therapies.

Some products have proved dangerous, blinding several patients and causing severe infections in at least a dozen people, some spending weeks in the hospital.

Stem cells are cells that can develop into a variety of specialized forms, like tissue or blood. Many of these clinics offer treatments billed as novel stem cell therapies that are derived from cells in the blood, fat or birth tissue.

While legitimate research on stem cells has tremendous promise, some “bad actors” are trying to cash in on patients’ hopes with “purported therapies,” according to a statement by Dr. Scott Gottlieb, the F.D.A. commissioner, and Dr. Peter Marks, director of the agency’s biologics center. The proliferation of rogue clinics has long been a concern of Dr. Gottlieb, who announced his resignation last month and will leave his post on Friday.

In the past year, the statement said, the F.D.A. has sent “regulatory correspondence” to 45 manufacturers and health care providers that market stem cells. The agency also said two lawsuits were pending. One is against U.S. Stem Cell Clinic of Sunrise, Fla., where three patients lost their sight after having stem cells injected into their eyes.

The other lawsuit is against the California Stem Cell Treatment Center, with locations in Rancho Mirage and Beverly Hills, and the Cell Surgical Network Corporation of Rancho Mirage, which treated cancer patients with a stem cell product made with smallpox vaccine. The F.D.A. said the product was risky. 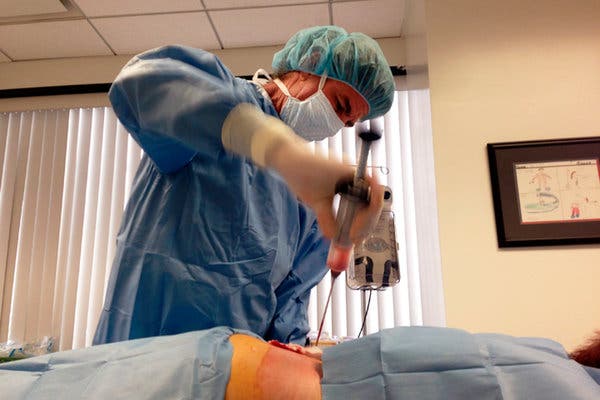 The latest warning letter, five pages long, went to Syed M. Raheel, identified by the F.D.A. as the president and owner of Cord for Life, in Altamonte Springs, Fla. The agency says the company makes unapproved products from umbilical cord blood and sells them in platinum, gold and silver categories. The letter stated that the company had violated federal laws by not obtaining F.D.A. permission to market its products.

Cord for Life also fared poorly on an F.D.A. inspection in November, according to the letter, which listed numerous deficiencies in sanitation, like employees wearing the same non-sterile smocks for up to two weeks, not changing gloves and not cleaning equipment properly.

The F.D.A. gave the company 15 days to present a plan for correcting the deficiencies, and noted that failing to act on the problems could result in “seizure and/or injunction” by the agency.

Donald Hudspeth, general manager of Cord for Life, said the company had already corrected the problems identified in the inspection. Mr. Hudspeth also said that Cord for Life was unaware that the F.D.A. expected it to submit more proof of completion.

In addition, he said the company had not received any reports of adverse reactions from its products in its 25-year history.

The F.D.A. did not release the names of the recipients of the other 20 letters.

In their statement, Dr. Gottlieb and Dr. Marks dismissed claims by some stem cell businesses that they are exempt from F.D.A. regulations because their practitioners extract stem cells from a patient’s own fat or bone marrow and then return the cells to the same patient. The cells do not qualify as drugs and do not need regulation, the clinics argue.

The two officials disagreed: “Stem cell products can create unique and serious risks depending on how they’re manipulated once they’re taken from the body and how they are used once they’re reinserted in the body.”

The statement also noted that the F.D.A. was halfway through a three-year period of what it calls “enforcement discretion,” meaning that in 2017 it put stem-cell clinics on notice that their treatments were likely to come under F.D.A. authority, but that instead of cracking down immediately it was giving them time to learn what rules applied to them and to comply.

So far, though, the industry’s response has been “modest,” the agency said, adding that once the three-year period is over, in November 2020, “we’ll step up our oversight.”